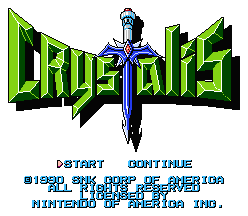 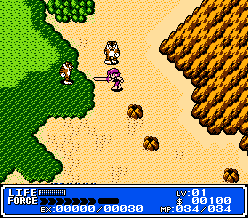 'Crystalis' is an Action-RPG for the Nintendo Entertainment System. It was released in Japan in April of 1990 and in the United States the following July. It was praised by critics at the time for its graphics and gameplay and it inspired a devout, if somewhat small, fan following. In Japan the game was called ゴッド・スレイヤー はるか天空のソナタ or God Slayer: Sonata of the Distant Sky.

Learn more about Crystalis by checking out the game's Wikipedia article or from some other great fan sites which you can find on my Links page.

How Can I Play It?

Crystalis is available as a part of the "SNK 40th Anniversary Collection"! Available on Nintendo Switch, Playstation 4, Xbox One, and Steam.

Welcome to my "Crystalis" Fan Site!

When I was 9 or 10 years old I played games like "Willow" and "Dragon Spirit: The New Legend" in the living room while Mom sat on the couch cheering me on. She played her fair share of games too. Her favorite at the time was "Swords and Serpents". She had a pad of graph paper in which she drew and labelled maps of each level.

One day Mom came home from work with a new game. She just read the back of the box and thought it sounded like something I'd be interested in. It was "Crystalis" and it quickly became my favorite NES game for its unique storyline, intense gameplay, and wonderful soundtrack.